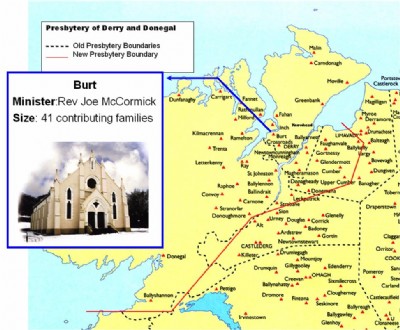 Below is a small piece of History regarding Burt
From: bob@electbobferguson.com
To: office@fahanchurch.org
Subject: Andrew Ferguson
Date: Mon, 5 Apr 2010 22:44:48 -0700

Hello— My name is Bob Ferguson.  I live in Seattle, Washington, in the United States.

It is my understanding from your website that your parish was originally connected with Burt.

Your website contains some information about my ancestors which has been very helpful in our search to learn more  about our family.  For example, under the section entitled “The Foundations” there is biographical information about both men which states:

I am interested in knowing if you have more information about these two men (or their families), or if you can point me in the direction of someone who might have such information.  We are especially interested in any information regarding Andrew Ferguson Senior’s parents and/or siblings.  We believe his father was Alexander Ferguson, also a minister, who came from Scotland to Ireland in the late 17th century, but we are unable to confirm this.

We are aware that there are gravestones and tablets at the ruins of Burt Presbyterian Church.  It is our understanding that both Andrew Fergusons are buried there, along with family members, and we are excited to visit that location at some point.  We do not have photos of those gravestones and tablets, but did find a web site which contained a transcription of the text on those markers.

If you have any information that might be relevant to this request it would be greatly appreciated.
Sincerely, Bob Ferguson