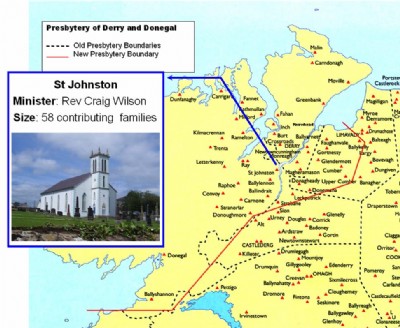 Photograph of the Church.

DAMAGED BY LIGHTNING ON 19TH DECEMBER 1982, THE TOWER WAS REBUILT USING THE ORIGINAL DESIGN AND CUT STONE

THE BUILDING WAS REOPENED ON 4TH MARCH 1984

On the 19th December 1982, the tower was struck by lightning during the night. The tower was restored using the same stone and the same design. The Church was reopened on 4th March 1984.

In 1834 the Presbyterians had the highest membership in the locality with 3318 members. Roman Catholics numbered 2207. The Reformation probably had no effect on the area until the Plantation times when the new settlers from Scotland brought their Presbyterianism with them. From 1609 on the Cunninghams and the Stewarts allocated land in such a way that eventually St Johnston and Carrigans developed.

A member of the Presbyterian Church in Ireland.