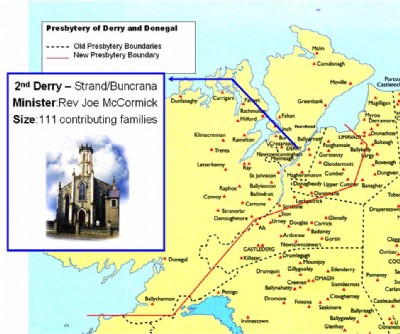 SUNDAY'S historic service at Strand Road Presbyterian Church was presided over by the Moderator of the Presbytery, Rev Dr Brian Brown, and the preacher was the Moderator of the General Assembly, Rt Rev Norman Hamilton.
The service began with a formal welcome and Scripture sentences by the Moderator of the Presbytery, who also led the prayer and Lord's Prayer, and the Opening Praise was Psalm 100, 'All People that on Earth do Dwell'. The Prayer of Intercession was said by Rev Dr Robert Buick, Minister of Carlisle Road, incorporating Strand and Buncrana and the Prayer of Dedication was offered by Rev J L Blair, Vacancy Convener.
The Benediction was said before a number os short speeches were made and after The Grace everyone was invited to remain for tea in the church hall.
The Scripture readings were by Rev J K McCormick, Minister Emeritus and John Reid, Clerk of Session
The organist was Thomas Wylie and the joint choirs of Kilfennan and Burt and Strand helped to lead the praise. Hymns for the occasion were 'Guide me, O thou great Jehovah', 'Oh God, our help in ages past' and 'Now than we all our God'.The soloist was Ella Orr.
To mark the occasion a special eight-page booklet was produced incorporating the order of service and a potted history of Strand Road Presbyterian Church and some black and white images offering a peek back in time.
The First Derry Secession congregation, later known as 2nd Derry or Strand, was formed in 1780, and was closely allied to Crossroads Church. The first small church was built in an entry off Fountain Street, where it remained for 65 years and both little churches were serviced by 'casual' preachers from Scotland. Rev Walter Galbraith, who was ordained on December 17, 1782, and preached on alternate Sundays in Crossroads and in Derry. Dying at the age of 45 he was buried in the Cathedral burial ground.
Union
It was in 1840 that the General Assembly of the Presbyterian Church came into being through the Union of the Synod of Ulster and the Secession Synod, and it was at this stage that First Derry Secession congregation became Second Derry.
The fascinating booklet reveals that it was during the ministry of Rev James Crawford, who had been ordained in 1811, that the Honourable the Irish Society gave a 'liberal subscription' and site for building a larger church - with a manse - and the foundation stone of the new church was laid on September 3, 1846 by the Deputy Governor of the Society, James Anderson. The site lay between the then St Patrick's Street and Ponsonby Street, looking towards William Coppen's Shipyard and the river. William Simpson in 'The Annals of Derry' (1847) claimed
"that the site is very low being reclaimed ground off the Strand Road leading to the Pennyburn'.
Interestingly, the booklet quotes The Sentinel: "The Sentinel reported that on the day in question 'the Deputation of the Honourable the irish Society , the Presbyterian Ministers of this city and a large concourse of our fellow-citizens assembled on the ground' including, it may be noted, the Rev Mr Gray of Burt'."
It was in the early 1970s that links were established between Second Derry and Inch and Buncrana, and 13 years later Inch was deemed too small to continue as a separate church and joined with Second Derry.
The cross-border link was strengthened by a union with the congregation of Burt. Rev J K McCormick came from Trinity, Letterkenny and Trentagh congregations, as was installed as Minister of Second Derry (Strand and Buncrana) and Burt on June 17, 1997. The next year was the 150th anniversary of the opening of Strand, and, naturally, a celebration took place.
The booklet does not shy away from the more painful aspects of the church, including changing demographics which have impacted heavily on congregation numbers and touches on the collapse of the Presbyterian Mutual Society.
Article above from the Londonderry Sentinel.