Please select this link to see details of a book on "The Descendants of Rev. Joseph Rhea"

Click here for more information on the Rhea connection.

The Rev. Joseph Rhea was the faithful pastor of Fahan and Inch Presbyterian Churches on the Inishowen Peninsula. Joseph Rhea was a scholary man, well versed in philosophy, theology and the Hebrew and Latin languages, and he was spoken off as one of the most eminent clerics in the north of Ireland, and later in the frontier lands of America. Large in stature, he was six feet in height, with a cheerful disposition, full of Irish jokes; pleasant in manner and kind and charitable to a fault. He had been known to take off his shirt and give it to the needy. He resigned his post at Fahan and Inch on August 16th 1769 after a disagreement over his annual salary of £24. 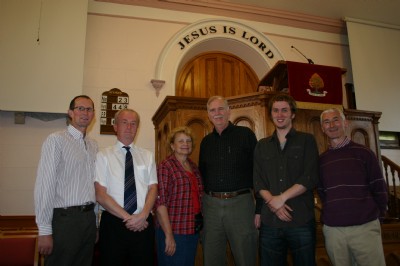 Patti and Peat Rhea (3rd and 4th from the left), ancestors of Rev. Joseph Rhea on a visit to the church their ancestor faithfully served in for twenty years in the 1700s. Also in the picture, left to right, Ivan Ferguson, Murry Ferguson, Richard Ferguson and David Lamberton. 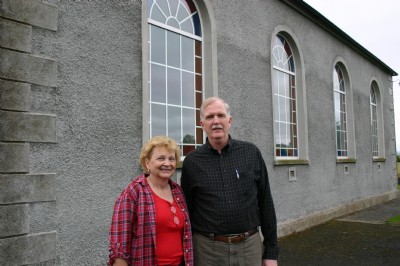 Patti and Pete Rhea outside Fahan Presbyterian Church. The Church is still active some two hundred and fift years after Rev. Joseph Rhea stood in the pulpit. The buildings will have changed over these years:
The stables are  no longer there, the manse has vanished, the "Meeting House at Tooban" is now called Fahan presbyterian Church, the gravel drive has been replaced with tar and chips while the main building is larger than originally constructed.