The story is told of an actor who was known for his readings and recitations from the Classics. He always ended his performance with a dramatic recital of Psalm 23. Each night, without exception, as the actor began his recitation -- "The Lord is my shepherd, I shall not want" -- the crowd would listen attentively and then rise with thunderous applause, in appreciation of the actor's ability to bring the psalm to life.

One night, just before the actor was to offer his customary recital of Psalm 23, a young man from the audience spoke up. "Sir, would you mind, if tonight, I recite Psalm 23?"

The actor was surprised by this unusual request. However he invited the young man to come onto the stage to recite the psalm; curious to see the how the ability of this youth weighed against his own talent.

Softly the young man began to recite the words of the psalm. When he was finished, there was no applause. There was no standing ovation as on other nights. All that could be heard was the sound of weeping. The audience had been so moved by the youth's recitation that every eye was tearful.

Amazed by what he had experienced, the actor queried, "I don't understand. I have been performing Psalm 23 for years. I have a lifetime of experience and training -- but I have never been able to move an audience as you have tonight. Tell me, what is your secret?" The young man humbly replied, "Well sir, you know the psalm...but I know the Shepherd."

A psalm of David.

1 The LORD is my shepherd, I shall not be in want.

2 He makes me lie down in green pastures,
he leads me beside quiet waters,

3 he restores my soul.
He guides me in paths of righteousness
for his name's sake.

4 Even though I walk
through the valley of the shadow of death,
I will fear no evil,
for you are with me;
your rod and your staff,
they comfort me.

5 You prepare a table before me
in the presence of my enemies.
You anoint my head with oil;
my cup overflows.

6 Surely goodness and love will follow me
all the days of my life,
and I will dwell in the house of the LORD
forever.

Fourth Finger.
Below are answers by two children to the story below. 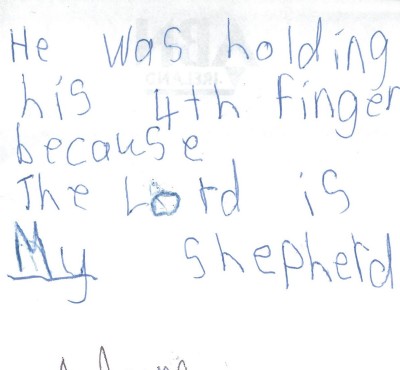 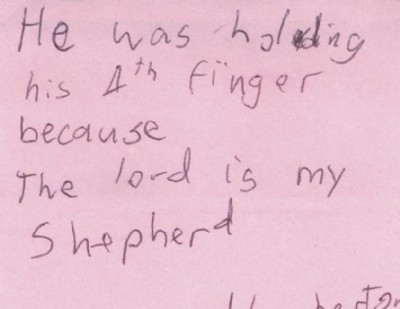 The boy from Scotland who died holding his fourth finger.

Sometimes children do not have an opportunity to learn to read or write, and sometimes they are simple minded and unable to learn like other children, however these children may have a true faith in the Lord Jesus as their Saviour.

The parents of a boy in died when he was very young and, as he had no one to care for him, he went to live with his aged grandfather who was a shepherd. His grandfather lived near the Scottish Highlands with its rugged rocks and high hills.  When the grandfather asked the boy to watch over his little flock of sheep, the boy would gaze at the rugged hills with admiration. This helped him to forget the sorrow he had felt when his parents died.  His grandfather was a fine Christian man who told him many of the stories in the Bible, especially stories about shepherds; how both Moses and David had been shepherds. The young boy would sit in front of the fire at night and listen with great interest to these stories. The grandfather was careful to tell him about the best of all shepherds, the Lord Jesus, who is called the 'Good Shepherd' in the Bible. He told him how the Good Shepherd loved His sheep so much that He even died to save them. The Good Shepherd would never let anything harm them or take His sheep away from Him.

This boy had never learned to read, so the grandfather taught him in a simple way to remember five lovely words about the Good Shepherd from Psalm 23:1 "The Lord is my shepherd." He took the boy's left hand, and as he said each word he would point to a finger. Soon the boy could say the words himself, holding each finger as he did so. The grandfather noticed that the boy seemed to take special pleasure in the fourth word 'MY’, and held his fourth finger tightly. As the boy grew a little older, he was able to take the sheep by himself to the to find pasture.

Late one afternoon the old man became very worried. The weather was very cold and it had been snowing for some time, and now the sky was becoming darker and darker.

Then he saw the snow-storm was already turning into a blizzard.  Quickly he put on his coat and hat and raced out of the house, and started towards the . However the fierce winds and blinding snow made it impossible. He would soon lose all sense of direction, and also his old and weary body was unable to go further.

With a heavy heart the old man returned  to his little cottage and slumped down on the chair in front of the fire.  Nothing could be done until the blizzard stopped.  He prayed to God to watch over the lad and to care for him. He thought of the things he had tried to teach him, and hoped that he would not forget them. The old man spent a long and restless night sitting in his chair.

Next morning, the snow had stopped and the sun began to shine so the old man wasted no time. He knew the paths through the and thought that he knew where the lad might be sheltering. He forced his weary legs to go as fast as he could through the thick snow. At last he came to where he had often told the lad to shelter if he ever needed to.  He called as loudly as he could, but there was no reply.  Suddenly, in the distance, he saw a mound in the snow. His heart sank as he raced towards it. Desperately he pushed the snow away and there he saw the little shepherd lad frozen to death. The old man wept sadly as he looked at the little body.

Finally, the old man continued to brush the snow away from the frozen body. Then he noticed that the lad's hands were clasped in a strange way. His right hand was firmly gripping the fourth finger of the left hand. The old man remembered how he had taught the lad to say 'The Lord is my shepherd' holding a finger for each word. There was no doubt that the finger the lad was holding stood for the word 'MY'.

The old grandfather lifted up his eyes and thanked God that this little shepherd lad had known that the "Good Shepherd" was his Shepherd.

If we were placed in a situation of danger and death, would we know the Lord and His word and be able to say, "The Lord is MY Shepherd?”